So many broken Obamacare promises,

unaffordable rates; these are our stories – won’t you share yours?

ObamaCare increased the price of your health insurance plan.
Tell us your story...

Pays $500 Per Month Under ObamaCare!

What if there's no affordable insurance to buy?

Leslie Kurtz needed three plates, eight screws and a big assist from her insurer after breaking every bone in her ankle while white water rafting.

Coverage she purchased through a public insurance exchange established by the federal health care law paid $65,000 toward surgery and the care she needed after the 2015 accident. But that protection may not exist next year because insurers have abandoned the Knoxville, Tennessee resident’s exchange. As of now, Kurtz has no future coverage options, and she is worried.

“I can’t afford to have everything I’ve worked for taken away because I fell down the steps,” Kurtz said.

Her county is one of 16 in Tennessee that lack even a single insurance company committed to offering coverage for 2018 on the exchange, after Humana announced last month plans to exit.

Exchanges set up by the Affordable Care Act were designed to give customers a chance to shop for coverage and then buy a plan, most with help from tax credits. The idea was that such a marketplace would push insurers to offer affordable plans to compete for customers.

But insurers in many markets have been pulling back from the exchanges after losing money. According to an analysis by the Associated Press and the health care firm Avalere Health, more than 1,000 counties, where about 2.8 million people are insured through the exchanges, are down to their last insurance carrier, according to the most recent data.

With less competition, that could mean sharply higher rates. And with more insurers still considering leaving other markets, customers around the country could be stuck like Kurtz with no affordable coverage options in 2018. 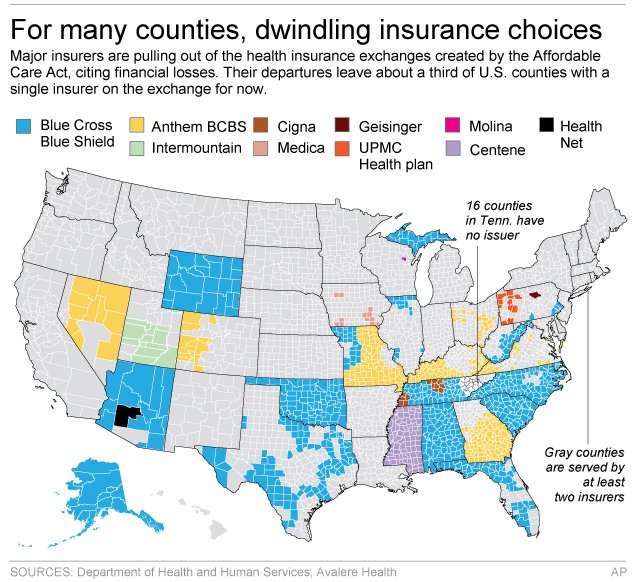 Insurers still have a few more weeks to decide to stay in their exchanges, and other insurers may jump into new markets, though that can be expensive and risky for them. The government recently announced several short-term fixes for the exchanges, and insurers have welcomed the moves. But they want to see the final version of the improvements before deciding on 2018.

“No insurer wants the negative public backlash from dropping insurance for lots of people, but the companies need to feel like the market is stable and that there’s a chance of making money,” said Larry Levitt, a health insurance expert with the nonprofit Kaiser Family Foundation.

Chief among undecided companies is the Blue Cross-Blue Shield carrier Anthem Inc. It is the lone insurer on exchanges in 300 counties in seven states, according to data compiled by the AP and Avalere.

Anthem CEO Joseph Swedish would not commit to participating on exchanges next year and said in a statement last month that the market is sliding toward “significant deterioration and requires changes to ensure future stability and affordability.”

Anthem and the many other companies that sell coverage under the Blue Cross-Blue Shield brand will be crucial to the fate of the exchanges because they often specialize in insurance for individuals, and many have a long-standing presence in their markets. They also are the only remaining option on exchanges in nearly a third of the nation’s 3,100 counties.

For instance, Blue Cross and Blue Shield of North Carolina is the lone exchange option in 95 counties, covering more than 500,000 people, according to the analysis by AP and Avalere. The North Carolina insurer, which is not owned by Anthem, declined to comment on its 2018 plans.

Insurers typically are still sorting out coverage plans at this time of year, so it’s not unusual for them to be undecided about 2018. But never before have insurers bluntly stated that they can’t commit until they see what the government does to improve the exchanges.

The Kaiser Family Foundation’s Levitt says insurers are worried about losses, but they also may be using the leverage their indecision gives them.

“Insurers kind of want the threat that they may pull out to be taken seriously now, so that they get some of the changes they are looking for,” he said.

Customers can buy coverage outside the exchanges, if insurers are selling individual plans in their market. But then they won’t be able to use tax credits to help pay the bills, which may be particularly painful since many markets have seen prices soar.

Customers won’t know for certain who is selling on their exchanges until next fall. While insurers have to apply to sell coverage on their exchanges generally by late spring or early summer, they can drop out later if claims turn out worse than expected, noted Dave Dillon, a fellow of the Society of Actuaries.

Last fall, Blue Cross and Blue Shield Nebraska announced a little more than a month before open enrollment started that it was shuttering its exchange business due to a loss of $140 million.

Insurance experts have said bigger metropolitan areas usually have more choice on their exchanges. But smaller cities or rural areas could be hurt most if more insurers pull back.

Customers who already lost exchange options for 2018 are concerned. Knoxville resident Melissa Nance bought her Humana plan on the exchange without a subsidy, but she’s worried that she won’t find an affordable replacement after that insurer leaves.

The 45-year-old is fighting an aggressive form of leukemia. She needs insurance to cover blood tests and CT scans to detect whether the cancer has returned.

“I’m a sick person now,” she said. “I am constantly having to go to the doctor.”

Fellow Knoxville resident Leslie Kurtz is thinking about moving. The self-employed television producer needs subsidies to afford coverage for her family of four.

Kurtz says she would have gone bankrupt if she had no insurance when she broke her ankle.

Right now, many people are focused on the details of the plan that will replace ObamaCare after it is repealed.

But let’s not put the cart before the horse here. First, we still need to repeal ObamaCare. And why? Because it’s hurting millions of Americans.  People like Susie from California. Here’s her story:

Not only is Susie’s monthly premium under Obamacare more expensive than her mortgage, her insurance (Covered California) has repeatedly fought her for every procedure, ER visit and doctor bill she has incurred. Worst of all, Susie has an arrhythmia problem but cannot get the cardiac rehab she needs despite a recent incident of incapacitating palpations which lasted for a day and a half. Susie says she truly doesn’t think her insurance cares if she lives or dies. In her words, “It’s sick to be treated like an unworthy person when you are so sick.”

Susie’s not alone. Here’s a photo that we were sent.

These are the victims of ObamaCare.

At BrokenObamaCarePromises.com, we’ve been collecting stories of the true human cost of ObamaCare. If ObamaCare has caused your insurance premiums to spike, or caused your policy to be cancelled, we want to hear from you. Share your story by emailing us at mystory@brokenobamacarepromises.com. Pictures and/or video testimonials are encouraged.

How ObamaCare Punishes the Sick

Republicans are nervous about repealing ObamaCare’s supposed ban on discrimination against patients with pre-existing conditions. But a new study by Harvard and the University of Texas-Austin finds those rules penalize high-quality coverage for the sick, reward insurers who slash coverage for the sick, and leave patients unable to obtain adequate insurance.

The researchers estimate a patient with multiple sclerosis, for example, might file $61,000 in claims. ObamaCare’s rules let MS patients buy coverage for far less, forcing insurers to take a loss on every MS patient. That creates “an incentive to avoid enrolling people who are in worse health” by making policies “unattractive to people with expensive health conditions,” the Kaiser Family Foundation explains.

To mitigate that perverse incentive, ObamaCare lobs all manner of taxpayer subsidies at insurers. Yet the researchers find insurers still receive just $47,000 in revenue per MS patient—a $14,000 loss per patient.

Predictably, that triggers a race to the bottom. Each year, whichever insurer offers the best MS coverage attracts the most MS patients and racks up the most losses. Insurers that offer high-quality coverage either leave the market, as many have, or slash their coverage. Let’s call those losses what they are: penalties for offering high-quality coverage.

The result is lower-quality coverage—for MS, rheumatoid arthritis, infertility and other expensive conditions. The researchers find these patients face higher cost-sharing (even for inexpensive drugs), more prior-authorization requirements, more mandatory substitutions, and often no coverage for the drugs they need, so that consumers “cannot be adequately insured.”

The study also corroborates reports that these rules are subjecting patients to higher deductibles and cost-sharing across the board, narrow networks that exclude leading cancer centers, inaccurate provider directories, and opaque cost-sharing. A coalition of 150 patient groups complains this government-fostered race to the bottom “completely undermines the goal of the ACA.”

It doesn’t have to be like this. Employer plans offer drug coverage more comprehensive and sustainable than ObamaCare. The pre-2014 individual market made comprehensive coverage even more secure: High-cost patients were less likely to lose coverage than similar enrollees in employer plans. The individual market created innovative products like “pre-existing conditions insurance” that—for one-fifth the cost of health insurance—gave the uninsured the right to enroll in coverage at healthy-person premiums if they developed expensive conditions.

If anything, Republicans should fear not repealing ObamaCare’s pre-existing-conditions rules. The Congressional Budget Office predicts a partial repeal would wipe out the individual market and cause nine million to lose coverage unnecessarily. And contrary to conventional wisdom, the consequences of those rules are wildly unpopular. In a new Cato Institute/YouGov poll, 63% of respondents initially supported ObamaCare’s pre-existing-condition rules. That dropped to 31%—with 60% opposition—when they were told of the impact on quality.

Republicans can’t keep their promise to repeal ObamaCare and improve access for the sick without repealing the ACA’s penalties on high-quality coverage.

Mr. Cannon is director of health policy studies at the Cato Institute.

"One of the Many Failed Policies"

My Rate Increase identifies just one of the broken promises of ObamaCare by drawing attention to the citizens who have seen their health insurance premiums hiked. We were told that households would save money with the new healthcare law, but it turns out that the Affordable Care Act isn’t affordable at all. Unfortunately, even more rate increases are expected. We must repeal and replace ObamaCare with a better, more affordable system.